How to Play Football Squares

Try before you Buy

Demo As Player Demo As Admin

There are many different ways people can play football squares, also known as Super Bowl Squares, so we'll try to sum up the different options. Most people play during the Super Bowl, but football squares can be played for other sports/games. The basics of the game are the following: 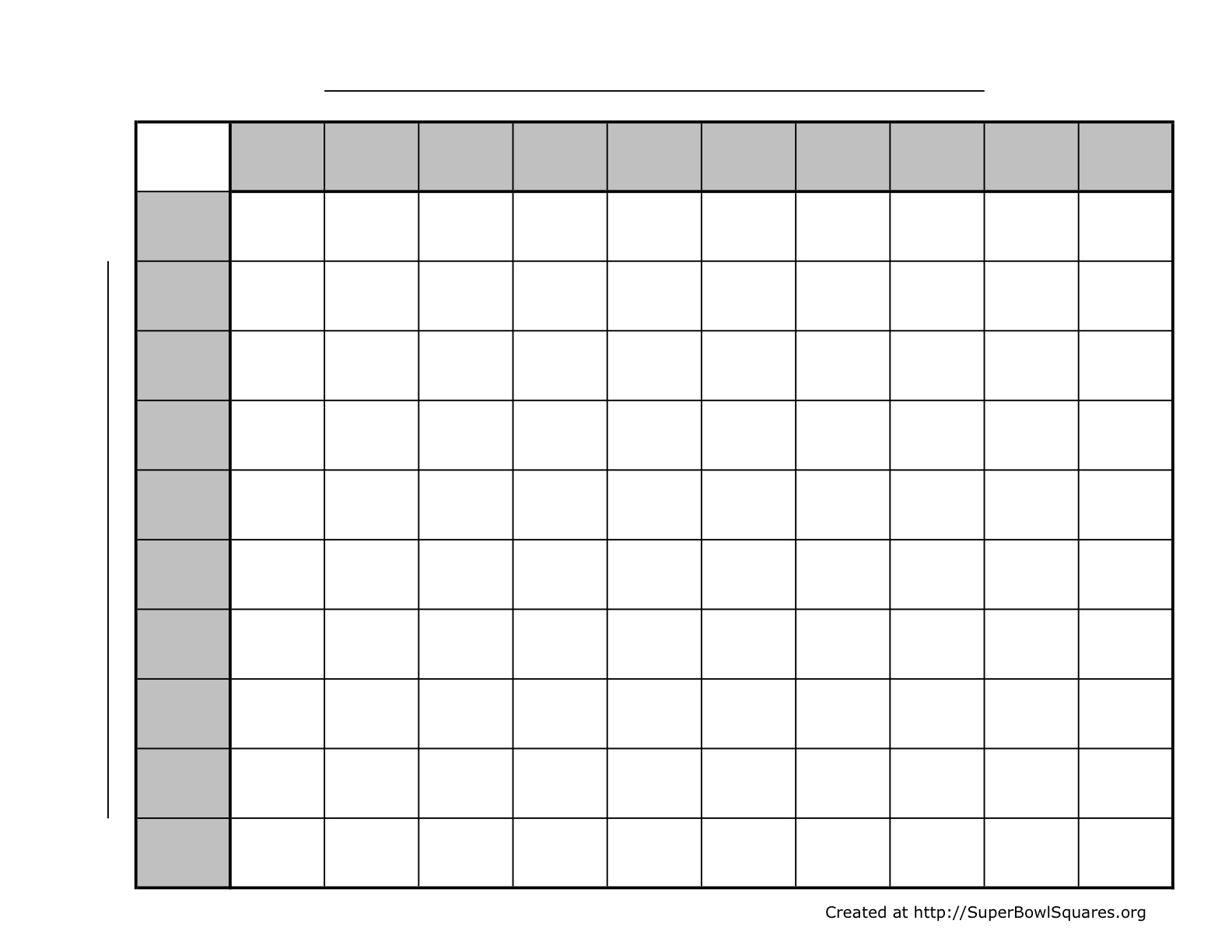 Start off with an empty 10 by 10 grid. This will give you 100 Squares for people to choose from. 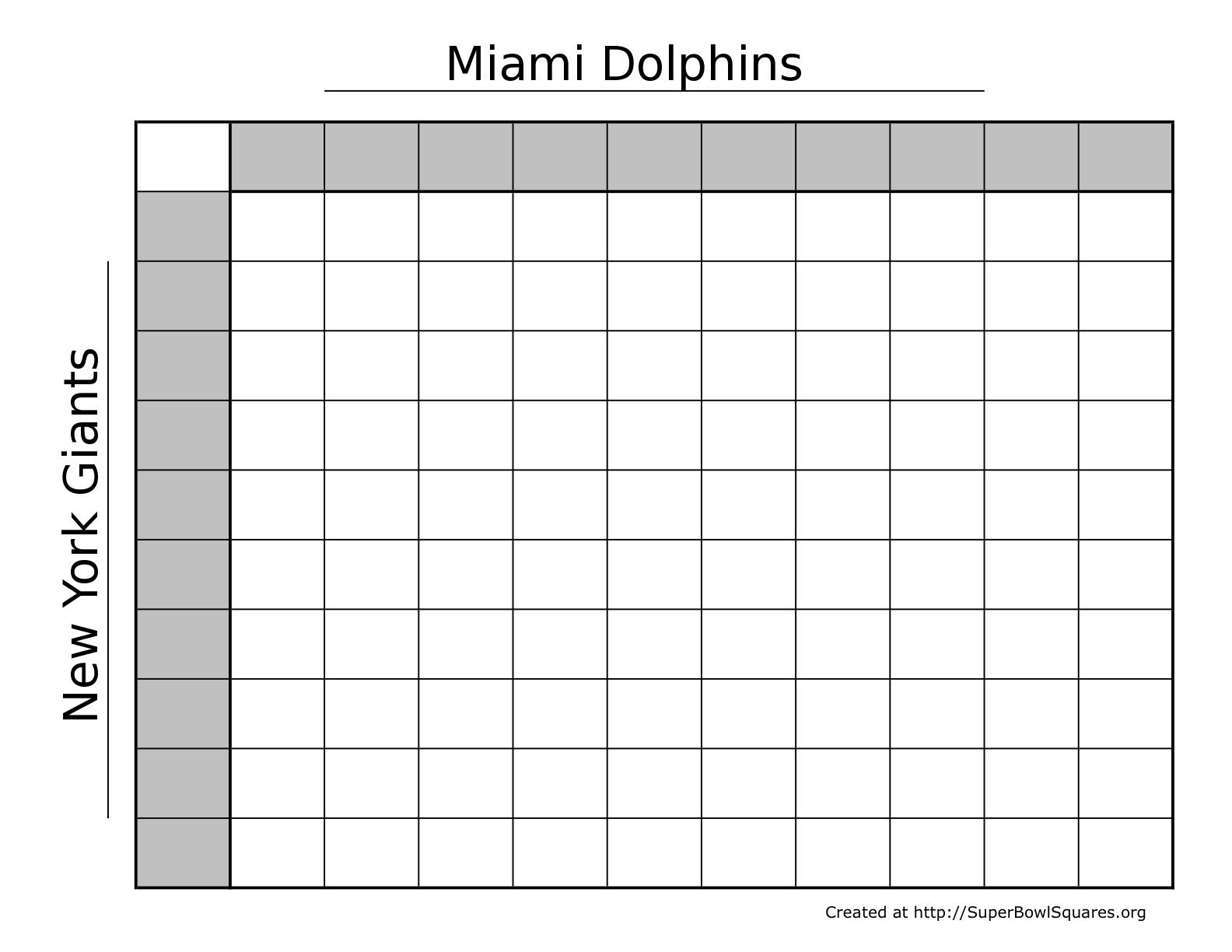 Depending on which game you are playing with, simply assign one team to the columns, and one to the rows.

Now, start recruiting people to join your Football Squares pool by letting them choose which squares they want. If you use our site to Play Football Squares Online, this will be a much easier process since you can simply email everyone the link to your site and let them choose their squares. If you decide to use a Spreadsheet or Printable Sheet, then this process will take extra time and effort since you have to manually pass along the file or sheet. 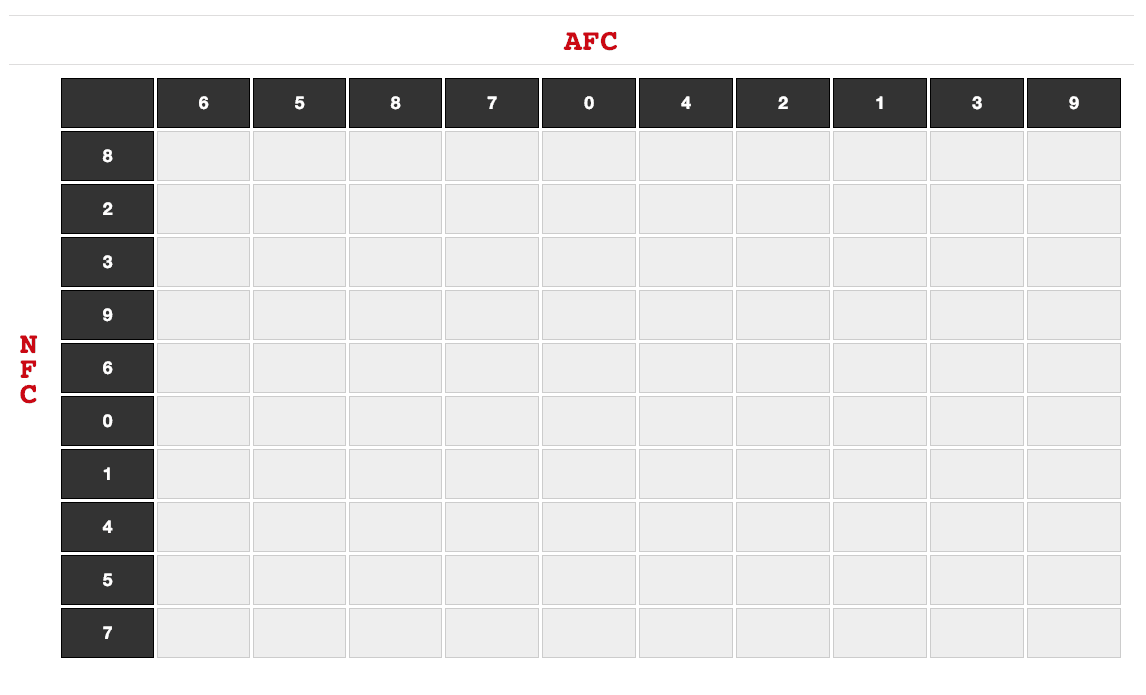 Once all the squares have been filled, it is time to assign the numbers to each column and row. By playing online, this is as simple as a click of the button. For those using offline options, randomly assign numbers 0 through 9 to each column, followed by doing the same for each row. Now each square represents a specific score in the game based on the column and row numbers. 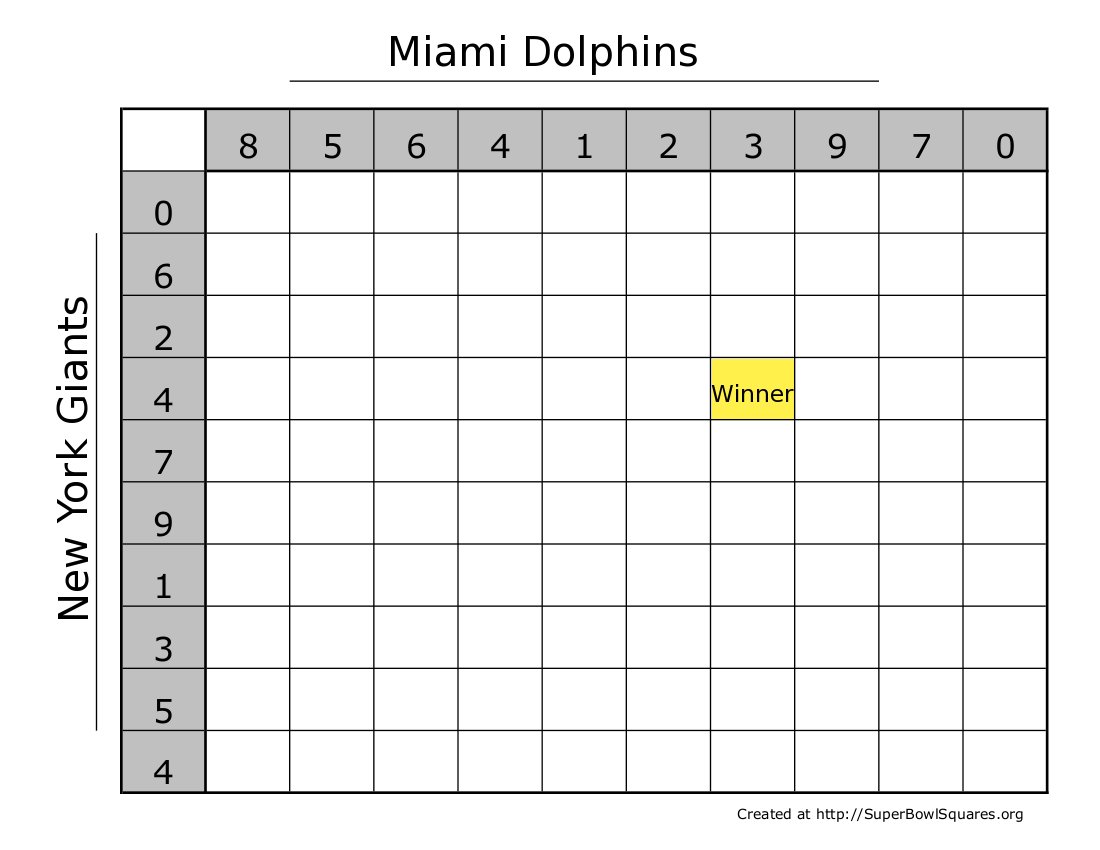 Your Football Squares grid is now complete, and you just need to wait til the game is played to determine who will be your winners. A winner will be determined at the end of the 1st quarter, 2nd quarter, 3rd quarter, and Final Game score. The winner is determined by looking at the last number in each teams' score, and then matching those numbers on the grid and seeing which square intersects those two numbers. An example would be having a score of AFC 23 - NFC 14. The last number for the AFC is 3, and the last number for the NFC is 4. The square on the grid that has the AFC with a number of 3, and NFC score of 4, would be the winner.

Payouts for the winners vary depending on your setup, but usually the 1st through 3rd quarter winners would each get 20%, and the final score would get the remaining 40%. When running for a charity or non-profit, usually 50% of the Pot goes to the charity, and the remaining is divided up among the winners. 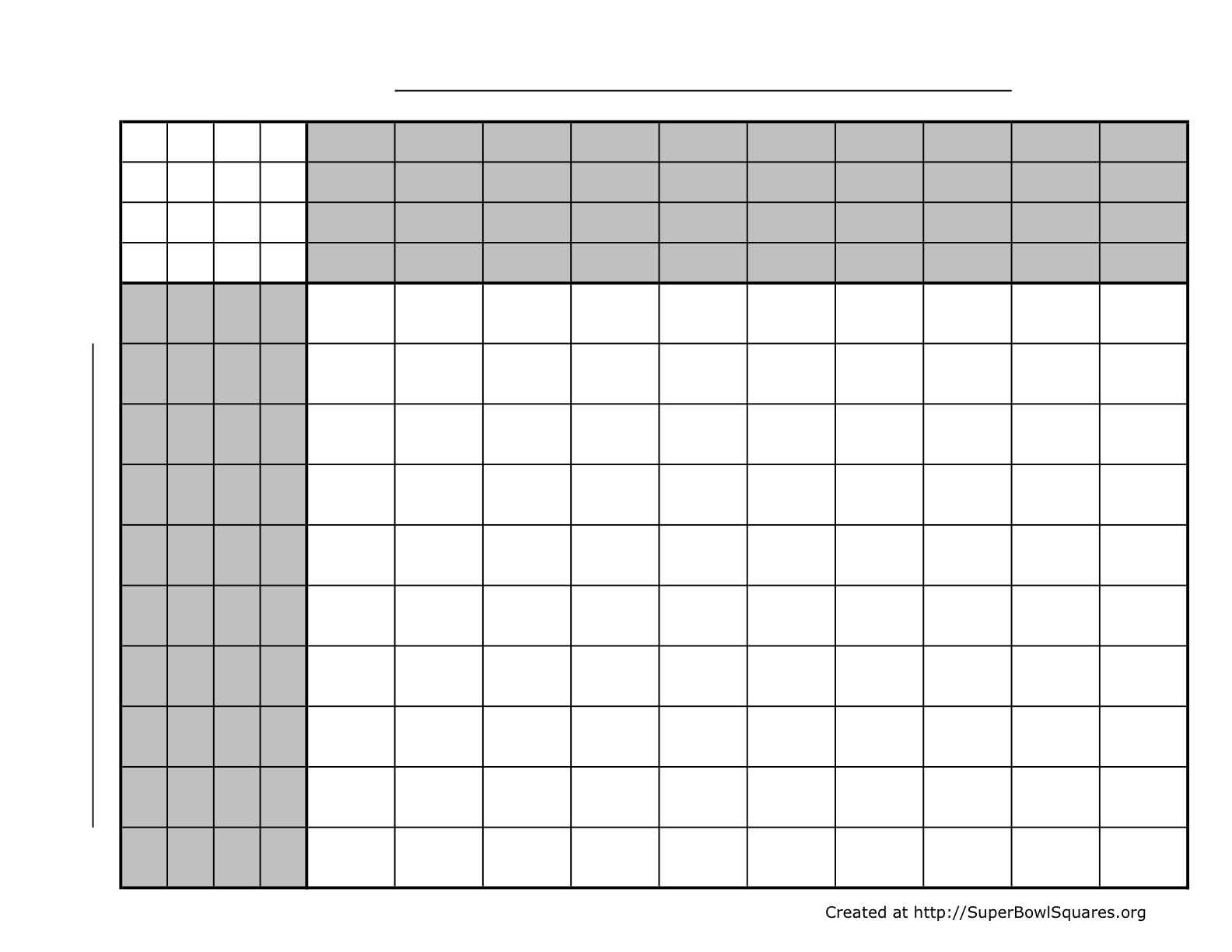 Assign a different set of numbers per Quarter 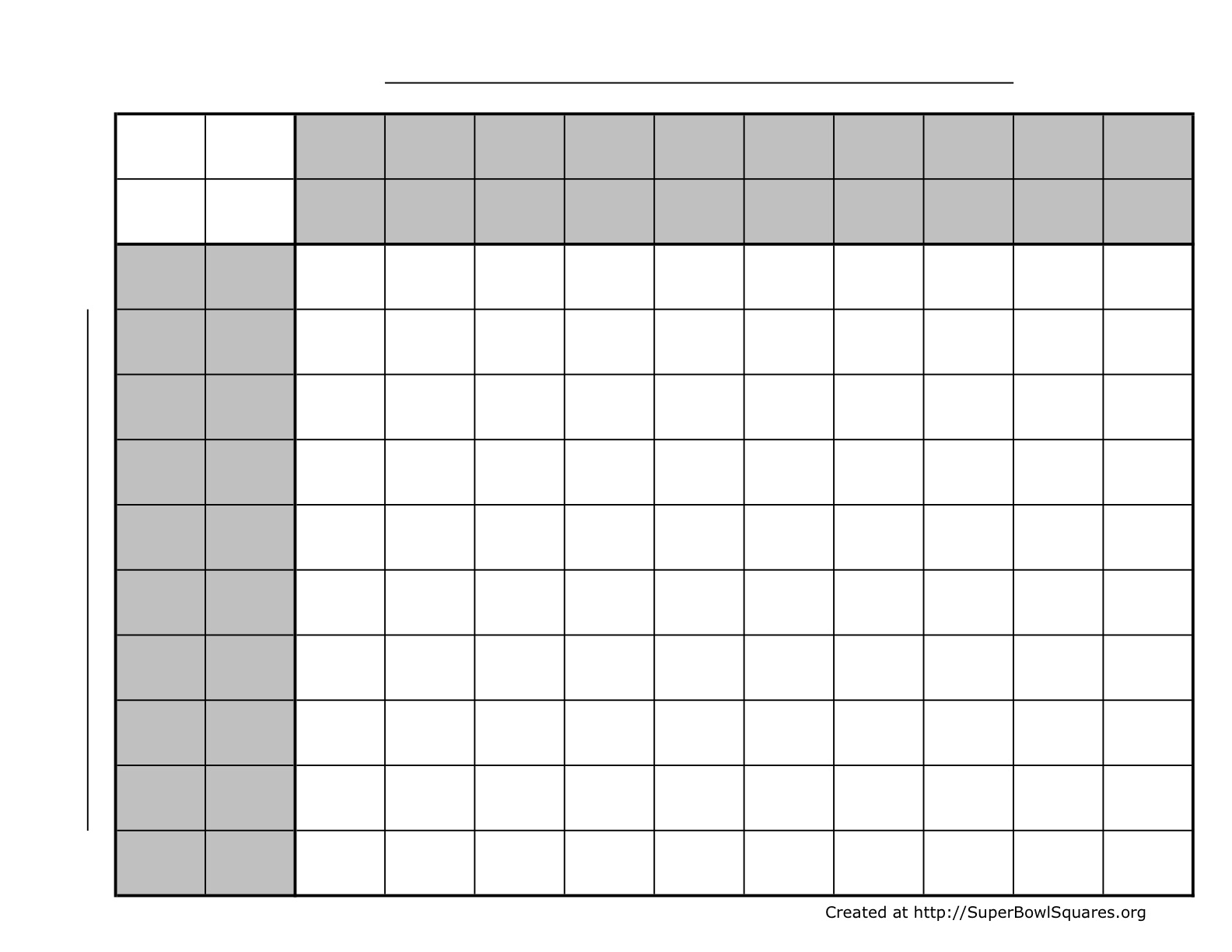 Assign a different set of numbers per Half 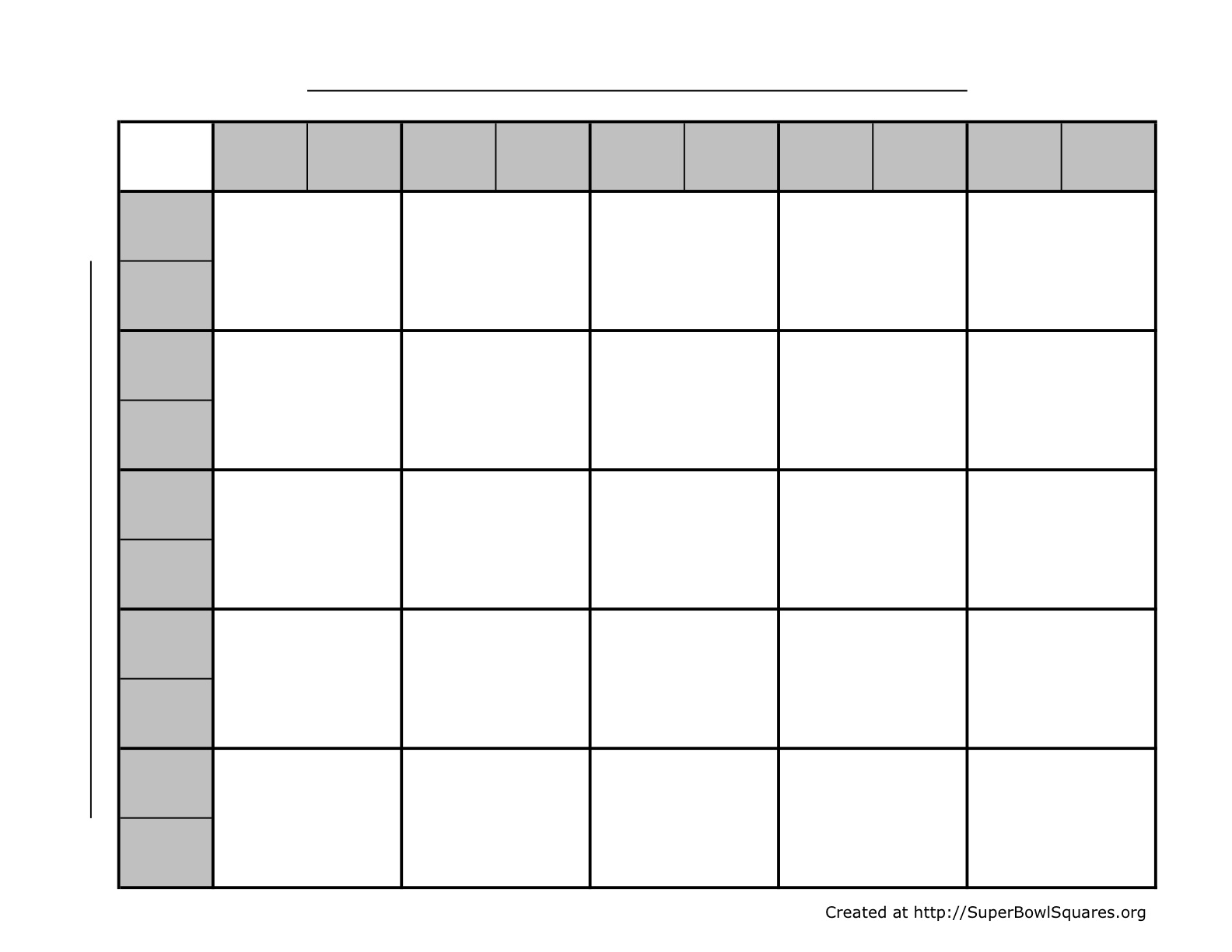 Use a 5 by 5 grid, where each square has two numbers for each team

Just wanted to say thank you so much for this site being so easy to use. I used it for fundraising and raised over $1000 towards my charity Team Challenge of the Crohn's and Colitis Foundation.

Great set up, I'll for sure be using next year!

This is a great tool for doing squares when your users are at many different locations, cities, states, etc.

Great app, by the way. My second year using it and makes my life much easier!

Just wanted you to know that we appreciate your service and we will always use this site every year thank you.

It's the best of its kind, I use it every year.

So on behalf of my company we just used your site company wide for 11 charts. We will use this every year. Love it!

Much better than my previous spreadsheet!

Thanks for the cool site, saves us a ton of trouble.